Complete the form below to receive the latest headlines and analysts' recommendations for Nutanix with our free daily email newsletter:

According to Zacks, “Nutanix is gaining from a steady expansion in the customer base. Moreover, adoption rate of the company’s AHV hypervisor was strong as customers continued to opt for it as a low-cost alternative to other vendor offerings. Further, a healthy pipeline of big deals is a tailwind. The company’s transition to software-only sales will boost its margins over the long-run. Additionally, Nutanix is expected to benefit from the growth prospects of the hyper converged infrastructure market, owing to its portfolio strength, over the long term. However, lower hardware revenues are expected to drag down the top-line in the near term. Also, the ongoing transition to a subscription-based business model is expected to hurt the top line, at least in the near term. Notably, shares of Nutanix have underperformed the industry in the past year.”

Nutanix (NASDAQ:NTNX) last released its earnings results on Wednesday, May 27th. The technology company reported ($0.69) earnings per share (EPS) for the quarter, beating the Thomson Reuters’ consensus estimate of ($0.86) by $0.17. Nutanix had a negative net margin of 68.91% and a negative return on equity of 1,175,319.00%. The firm had revenue of $318.30 million during the quarter, compared to analyst estimates of $314.53 million. During the same period last year, the business earned ($0.56) earnings per share. The business’s revenue was up 10.5% on a year-over-year basis. On average, equities research analysts forecast that Nutanix will post -4.41 earnings per share for the current year.

Featured Story: Understanding each part of a balance sheet 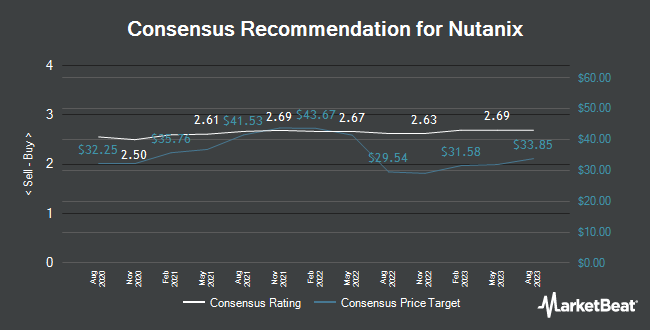 Receive News & Ratings for Nutanix Daily - Enter your email address below to receive a concise daily summary of the latest news and analysts' ratings for Nutanix and related companies with MarketBeat.com's FREE daily email newsletter.