Complete the form below to receive the latest headlines and analysts' recommendations for WillScot with our free daily email newsletter:

Dendur Capital LP grew its holdings in WillScot Corp (NASDAQ:WSC) by 30.3% during the 2nd quarter, according to its most recent Form 13F filing with the Securities and Exchange Commission (SEC). The fund owned 2,151,882 shares of the company’s stock after purchasing an additional 500,830 shares during the quarter. WillScot makes up approximately 10.0% of Dendur Capital LP’s portfolio, making the stock its 4th largest holding. Dendur Capital LP’s holdings in WillScot were worth $26,447,000 as of its most recent SEC filing.

In related news, Director Jeffrey Sagansky sold 52,285 shares of WillScot stock in a transaction on Friday, August 14th. The shares were sold at an average price of $17.87, for a total transaction of $934,332.95. Following the sale, the director now owns 2,115,656 shares of the company’s stock, valued at approximately $37,806,772.72. The transaction was disclosed in a legal filing with the Securities & Exchange Commission, which is accessible through this link. Insiders own 63.50% of the company’s stock.

WillScot (NASDAQ:WSC) last released its quarterly earnings results on Monday, August 10th. The company reported $0.10 earnings per share (EPS) for the quarter, topping the Thomson Reuters’ consensus estimate of $0.06 by $0.04. WillScot had a net margin of 1.70% and a return on equity of 6.95%. The firm had revenue of $256.90 million for the quarter, compared to the consensus estimate of $256.40 million. The company’s revenue for the quarter was down 2.6% compared to the same quarter last year. As a group, analysts predict that WillScot Corp will post 0.7 EPS for the current year.

Willscot Corp. operates as a holding company, which engages in the provision of modular space and portable storage markets. Its services include furniture rental, transportation and logistics, storage & facilities services and commercial real estate. The company was founded by Albert Vaughn Williams in 1944 and is headquartered in Baltimore, MD.

Want to see what other hedge funds are holding WSC? Visit HoldingsChannel.com to get the latest 13F filings and insider trades for WillScot Corp (NASDAQ:WSC). 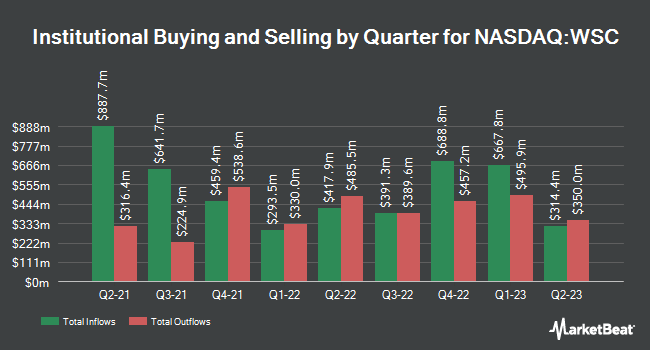 Receive News & Ratings for WillScot Daily - Enter your email address below to receive a concise daily summary of the latest news and analysts' ratings for WillScot and related companies with MarketBeat.com's FREE daily email newsletter.