Complete the form below to receive the latest headlines and analysts' recommendations for Reliant Bancorp with our free daily email newsletter:

Equities research analysts expect Reliant Bancorp Inc (NASDAQ:RBNC) to post sales of $30.62 million for the current quarter, according to Zacks. Three analysts have issued estimates for Reliant Bancorp’s earnings, with estimates ranging from $29.83 million to $32.02 million. Reliant Bancorp reported sales of $16.82 million in the same quarter last year, which indicates a positive year over year growth rate of 82%. The business is expected to announce its next earnings results on Tuesday, October 27th.

On average, analysts expect that Reliant Bancorp will report full year sales of $116.09 million for the current year, with estimates ranging from $113.80 million to $119.20 million. For the next year, analysts forecast that the business will post sales of $118.77 million, with estimates ranging from $115.20 million to $122.19 million. Zacks Investment Research’s sales averages are an average based on a survey of sell-side analysts that that provide coverage for Reliant Bancorp.

Reliant Bancorp (NASDAQ:RBNC) last posted its earnings results on Friday, July 24th. The bank reported $0.60 earnings per share for the quarter, topping the Thomson Reuters’ consensus estimate of $0.28 by $0.32. Reliant Bancorp had a net margin of 13.74% and a return on equity of 9.21%. The business had revenue of $34.38 million for the quarter, compared to analyst estimates of $28.83 million.

In other Reliant Bancorp news, insider William M. Fitzgerald II bought 7,300 shares of the stock in a transaction on Friday, August 21st. The stock was purchased at an average price of $15.39 per share, with a total value of $112,347.00. Following the completion of the purchase, the insider now owns 7,300 shares in the company, valued at $112,347. The purchase was disclosed in a filing with the SEC, which is accessible through this link. In the last three months, insiders have acquired 8,900 shares of company stock valued at $136,075. Insiders own 12.30% of the company’s stock.

The firm also recently announced a quarterly dividend, which was paid on Friday, August 21st. Shareholders of record on Friday, August 7th were paid a dividend of $0.10 per share. This represents a $0.40 annualized dividend and a yield of 2.69%. The ex-dividend date of this dividend was Thursday, August 6th. Reliant Bancorp’s payout ratio is 25.97%.

Reliant Bancorp, Inc operates as the holding company for Reliant Bank that provides a range of commercial banking services for businesses and individuals in the Middle Tennessee region and the Nashville-Davidson-Murfreesboro-Franklin Metropolitan Statistical Area. Its deposit products include checking, savings, and money market deposit accounts; time deposits; certificates of deposit; and non-interest-bearing and interest bearing demand deposits.

See Also: Does a trade war provide a risk to the global economy? 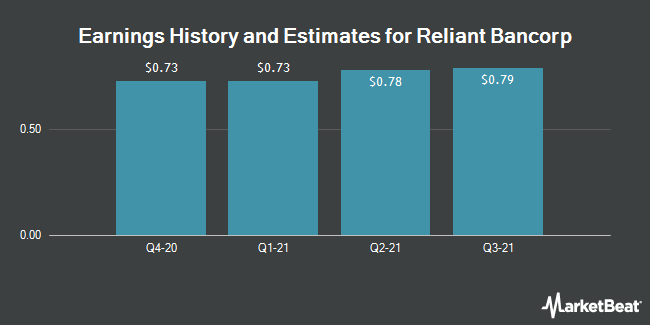