Complete the form below to receive the latest headlines and analysts' recommendations for Talos Energy with our free daily email newsletter:

Equities research analysts expect that Talos Energy Inc (NYSE:TALO) will announce $203.23 million in sales for the current fiscal quarter, according to Zacks. Four analysts have issued estimates for Talos Energy’s earnings, with estimates ranging from $183.00 million to $235.38 million. Talos Energy posted sales of $228.86 million during the same quarter last year, which suggests a negative year-over-year growth rate of 11.2%. The business is scheduled to issue its next quarterly earnings results on Wednesday, November 4th.

According to Zacks, analysts expect that Talos Energy will report full-year sales of $801.94 million for the current financial year, with estimates ranging from $680.00 million to $886.70 million. For the next fiscal year, analysts expect that the business will report sales of $898.78 million, with estimates ranging from $795.72 million to $976.80 million. Zacks’ sales calculations are an average based on a survey of research analysts that that provide coverage for Talos Energy.

Talos Energy (NYSE:TALO) last announced its quarterly earnings results on Wednesday, August 5th. The company reported ($0.48) EPS for the quarter, beating the Zacks’ consensus estimate of ($0.53) by $0.05. The business had revenue of $88.87 million for the quarter, compared to analyst estimates of $139.88 million. Talos Energy had a net margin of 12.28% and a return on equity of 8.15%. 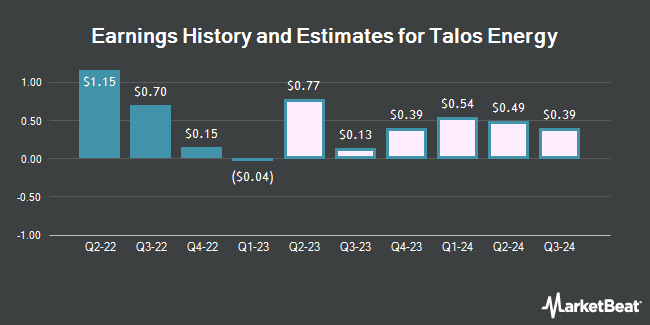