Complete the form below to receive the latest headlines and analysts' recommendations for First Hawaiian with our free daily email newsletter:

First Hawaiian Inc (NASDAQ:FHB) has been given an average rating of “Hold” by the eleven research firms that are covering the firm, MarketBeat Ratings reports. Four analysts have rated the stock with a sell recommendation, four have assigned a hold recommendation and two have given a buy recommendation to the company. The average 12-month target price among brokerages that have covered the stock in the last year is $19.86.

First Hawaiian (NASDAQ:FHB) last announced its quarterly earnings data on Friday, July 24th. The bank reported $0.16 EPS for the quarter, missing the Thomson Reuters’ consensus estimate of $0.22 by ($0.06). The business had revenue of $173.48 million during the quarter, compared to the consensus estimate of $179.45 million. First Hawaiian had a net margin of 24.42% and a return on equity of 7.73%. During the same period last year, the company earned $0.54 EPS. On average, equities research analysts forecast that First Hawaiian will post 1.1 EPS for the current fiscal year.

First Hawaiian, Inc operates as a bank holding company for First Hawaiian Bank that provides a range of banking services to consumer and commercial customers in the United States. It operates in three segments: Retail Banking, Commercial Banking, and Treasury and Other. The company accepts various deposit products, including checking and savings accounts, and time deposit accounts. 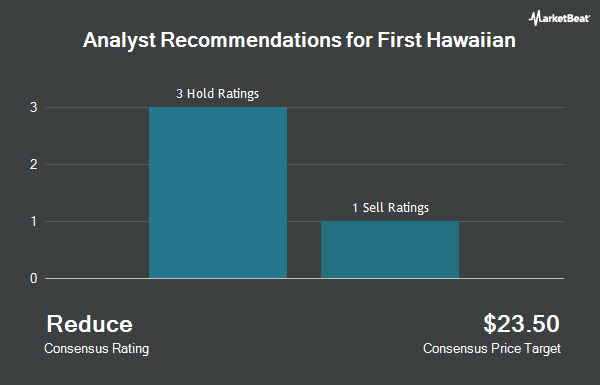